Battery on a Sports Official Is Its Own Crime in California

The Ventura County Star is reporting that a Mt. San Antonio College football player was arrested on suspicion of battery of a sports official. The player is accused of punching and knocking out a referee during a football game. 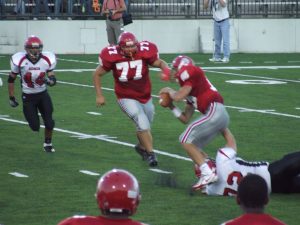 Interestingly, the reports are saying that the arrested player claims he never hit the referee on purposes. He claims that after becoming angry with an opposing player, he hit himself on the helmet to calm himself down. Apparently, he missed his own helmet and struck the referee instead. Whether this is a viable defense will depend on any further video of the incident, eyewitness testimony and the version of events from both the defendant and the alleged victim. If there was no intent to strike the official, then the battery charge cannot stand. This may be a question for the jury.

Either way, welcome to football season.

If you or a loved one are accused of a crime, do not hesitate to contact the Law Offices of Jerod Gunsberg at (323) 633-3423 or via this contact form.