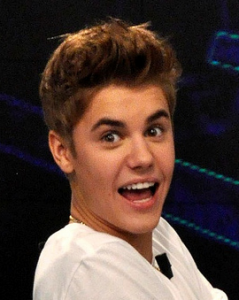 It appears that Justin Bieber is under investigation by the LAPD for attempted robbery of a woman’s cell phone at the bating cage/mini-golf place in Sherman Oaks. Yep, that place on Sepulveda you had your 10th birthday party. According to LAist:

Authorities said the incident occurred around 10:30 p.m. at the Sherman Oaks Castle Park that has a mini-golf course and batting cage, according to the Los Angeles Times. A woman told TMZ that Bieber, 20, got in a fight with some dudes at the batting cage and thought he saw her taking out her cell phone to take snapshots of the situation. He wrangled with her to get her phone, even grabbing it out of her purse when she refused to give it to him to get her to erase the photos, she claimed.

According to the media coverage, it turns out that Bieber couldn’t unlock the phone, so he allegedly made the woman unlock it and prove to him that there weren’t any pictures of him on the phone, which there weren’t. He then gave the phone back.

First, I don’t see how this is an attempt robbery of the phone (yes, if you want to sound like a criminal law insider you say “attempt” instead of “attempted”). Under California Penal Code Sections 664 and 211, the DA would need to prove that Bieber specifically intended to use force or fear to take this woman’s phone and that he took a substantial but ineffective step towards achieving his goal. That’s just not the case here. He was after the pictures on the phone, not the phone itself.

But what about an attempt robbery of the photos? Maybe.

Here’s how the theory could work:

Justin Bieber is a public figure in a public place, he has not reasonable expectation of privacy and people are certainly free to take his picture. Under the principles of copyright and intellectually property law, if the woman had actually snapped photos of Bieber, she would be the owner of those photos, not the Bieber. Bieber then allegedly used force or fear in an attempt to get the woman to delete any photos of him from her phone. Photos which, if they existed, rightfully belonged to her.

Now to be clear, I don’t want to see Bieber get arrested and he has not been arrested for any sort of robbery, attempted or otherwise, and he is 100% presumed innocent. But this investigation does raise some interesting issues about whether one can commit a robbery based on the forced destruction of content on a phone, computer, or other device.

If you or a loved one are charged with robbery or under investigation for any criminal charge in Los Angeles or anywhere else in California, contact The Law Offices of Jerod Gunsberg at (310) 210-0744 or through this confidential contact form.