If I Get Caught Buying Drugs At Coachella, It’s Not That Big of a Deal, Right? 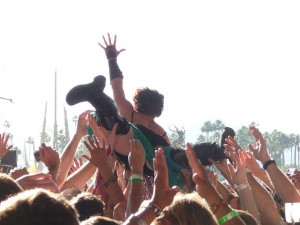 Thanks vonlohmann for the great Coachella picture

If you think it’s smarter bring your own drugs rather than wait until you get inside to score some weed, you’re wrong. I’m not telling you that that buying drugs at the festival is better than smuggling in your stash. I’m telling you that both are a pretty terrible idea. I know what you’re thinking.

“I know my rights, man. They can’t arrest me for less than an ounce. Do you really think they’re going to care about my personal use anyway when there are clowns selling drugs 300 feet away?”

Unfortunately for you, I think they will. Let’s have another review of Drug Possession in California 101.

Yes, it’s true that drug arrests for marijuana are only made if you possess a certain amount. But even if you’re just splitting a joint with the patchouli-wearing hippie with dreads next to you, you’ll still be charged a fine and be out up to a hundred one-spots. Repeat after me: Sharing is caring. Sharing drugs is not. And neither is buying drugs, my friend. If you’re buying more than an ounce – and let’s be real, that quarter probably won’t get you through – surprise! You’re under arrest and subject to jail time, a fine, or a fun combination of the two. Your only exception is medical necessity, and if that’s the case, you shouldn’t be getting your meds from a girl in face paint at Coachella, especially when she turns out to be an undercover cop. Whoopsy!

Arrested with a Controlled Substance, PCP, or Meth

Unlike marijuana, there is no safe zone for buying “just a little bit” of E or coke. If you get caught, you get arrested, complete with potential jail time and lots of fines. Now if you actually have a prescribed controlled substance with your very own name on the bottle, that’s fine. Just don’t make it look like you’re selling by bringing an entire month’s worth. Bring what you need and leave the rest.

If you get arrested at Coachella, contact defense attorney Jerod Gunsberg for a free and confidential consultation at (323) 633-3423 or via the secure contact form on this page.